The ultimate guide to the Uyghur Forced Labor Prevention Act:
How to thrive with the new legislation

SEND THIS INFORMATION TO YOUR INBOX
Ever since the Uyghur Forced Labor Prevention Act was signed on December 23, 2021, it has caused a surge in media coverage and company concerns. FRDM has talked with numerous clients who are worried about how this new legislation will impact their business, particularly as it regards procurement and compliance teams.
Legislation is always changing, but this law could lead to significant changes in the way trade can move from China across US borders. Here’s how we will break it down:
Why did the US pass legislation around Uyghur forced labor?
What’s in the legislation?
When does it go into effect?
How to thrive while operating under the Uyghur Forced Labor Prevention Act

Why did the US pass legislation around Uyghur forced labor?

The language around the legislation is pretty clear:
‍

President Biden today signed the Uyghur Forced Labor Prevention Act, underscoring the United States’ commitment to combatting forced labor, including in the context of the ongoing genocide in Xinjiang. The State Department is committed to working with Congress and our interagency partners to continue addressing forced labor in Xinjiang and to strengthen international action against this egregious violation of human rights.  This new law gives the U.S. government new tools to prevent goods made with forced labor in Xinjiang from entering U.S. markets and to further promote accountability for persons and entities responsible for these abuses.”
The genocide and forced labor have been thoroughly researched. As described in the US State Department’s fact sheet, the mass detention and political indoctrination campaign has been ongoing since 2017. The Uyghurs are predominantly Muslim and have been forced into state-run internment camps along with other ethnic and religious minorities. These camps are based throughout the Xinjiang Uyghur Autonomous Region. The Xinjiang region is about the size of six Californias, situated in northwestern China.
‍
The international outcry about the abuse was initially met by the Chinese government with denial and dismissing allegations as international interference. After multiple reports including eyewitness accounts and thorough research, the government eventually admitted the existence of the groups but defended them as necessary to counter terrorism.
‍
Victims of the camps are often forced to work in adjacent or off-site factories, working across sectors including textile products such as cotton, solar component manufacturing, consumer electronics, food products, chemicals, and more. These materials and products are then added into international supply chains, making outside countries and companies complicit in forced labor.
This is a clear human rights violation. But there is human rights abuse around the world. So why did the US government and Biden administration take the forced labor practices so seriously? In part, it’s because of international trade agreements.
‍
Under the 2020 United States-Mexico-Canada Agreement (USMCA), the US must prohibit the importation of goods from sources produced in whole or in part by forced or compulsory labor. This turns a human rights issue into a potential trade agreement breach. The forced labor bill was passed with unanimous support through the US Senate and a near-unanimous vote through the House. While the mindset and rationale for the bill may vary across the aisle, it’s clear that both political parties are united in their support for this legislation.

What’s in the legislation?

The Uyghur Forced Labor Protection Act works on the assumption that all goods produced (in full or in part) in Xinjiang were made with forced labor and are thus prohibited from entry at any US ports. This includes connected entities that work with the Xinjiang government to recruit, transport, or receive forced labor from the region, as well as entities that participate in the country’s “poverty alleviation” or reeducation programs of these persecuted groups.
‍
Before this legislation was passed, the Customs and Border Patrol (CBP) had the authority to prevent imports by issuing Withhold Release Orders (WROs). WROs block shipments and can be created across industries, regions, companies, or even fishing vessels. For example, there was already a WRO on all cotton and tomatoes from Xinjiang, as well as WROs against a variety of specific rubber glove manufacturers in Malaysia. If a WRO is issued, organizations must prove that products weren’t made with forced labor within the past three months or the shipment can be destroyed or turned around.
‍
With the implementation of the Uyghur Forced Labor Protection Act, the CBP will automatically assume that all goods from Xinjiang, regardless of company or industry, should be blocked rather than blocking them one by one with WROs. That said, organizations should assume that the most stringent attention will be given to high-priority enforcement sectors that were the initial focus in the region: cotton, tomatoes, and polysilicon. 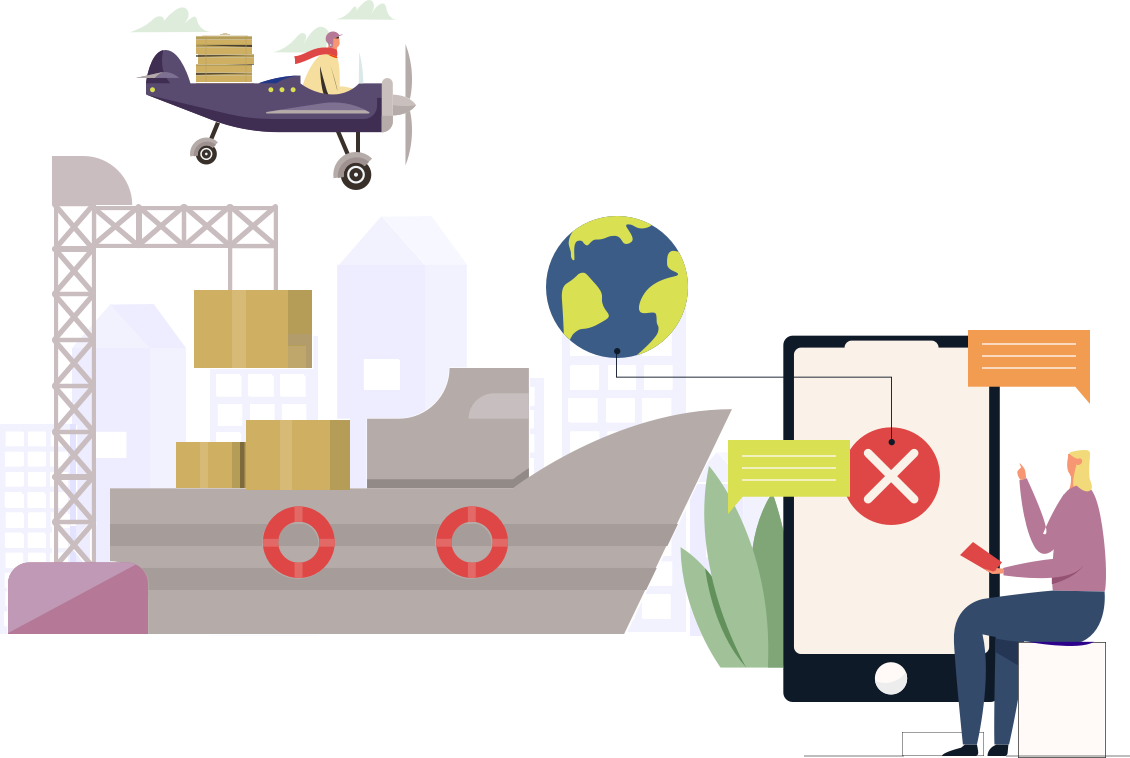 To get an exception from the import ban, the importer must provide “clear and convincing” evidence that the goods were not produced wholly or partially with forced labor. Every time that the Commissioner of CBP issues such an exception, they must submit a report to Congress within 30 days identifying the goods that were subject to the exception and what evidence was submitted for that determination. All of those reports must also be made available to the public, and are usually covered in the media.
‍

When does it go into effect?

The Uyghur Forced Labor Prevention Act takes effect 180 days after enactment, on June 21, 2022. These are important milestones along the way. Within 30 days of enactment (by January 22, 2022) the Forced Labor Enforcement Task Force (FLETF) will publish a notice seeking public comment on how best to ensure that goods that are mined or produced with forced labor in China are not imported into the United States.Within 45 days after that notice is given (by March 8, 2022) the public (which includes private sector businesses and non-governmental organizations (NGOs)) will submit their suggestions.Within 45 days of closing the public comment period (April 22, 2022) the FLETF will hold a public hearing. They will invite witnesses to testify regarding measures that can be taken to ensure that goods made with Uyghur forced labor don’t enter the United States.No later than 180 days after enactment (June 21, 2022) the FLETF must submit to Congress a strategy for supporting CBP’s processes for enforcing the act.

The strategy must include guidance for importers regarding due diligence and supply chain tracing, as well as advice on what kind of evidence will be required to prove that goods weren’t produced with forced labor. The FLETF must submit an updated strategy to Congress annually.NB: the FLETF’s enforcement strategy only needs to be submitted on the day that the act goes into effect. This means that importers may have little to no notice of what evidence they must submit to rebut the presumption against importation.
‍

How to thrive while operating under the Uyghur Forced Labor Prevention Act.

At the time of writing, there are a lot of unknowns. Until the FLETF’s strategy is submitted to Congress, it’s impossible to predict exactly what documentation will be required or the best way for importers to move forward and keep supply chains resilient.
‍
That said, there are some first steps that FRDM has identified that can help organizations like yours stay ahead of the legislation, and even prepare for future requirements. These include figuring out any potential connections your supply chain has to Xinjiang, working with your suppliers to document their due diligence and supply chain mapping, and keeping tabs on real-time updates to the information that’s available about potential risks and connections.

We often say at FRDM that you can’t fix what you can’t find. This means that the first step towards complying with any legislation is to know what you are buying, and who you are buying it from. While this seems simple, our complicated global supply chain has made it opaque.
‍
For example, you may think that your organization is above board when purchasing ethically sourced T-shirts for merchandizing. But Xinjiang cotton accounts for 85% of China’s cotton production, which accounts for 20% of the world’s supply. Even if you import from other countries in East Asia, there’s still a substantial chance that the raw cotton came from forced Xinjiang production.
‍
Using proprietary first-party data and an innovative product genome, FRDM can analyze your spend data to provide a predictive bill of materials, including upstream commercial connections to your business. With more spend data, like purchase level details, the deeper our analysis can go, telling you where your supply chain may risk being complicit with forced labor. Additionally, FRDM’s Xinjiang module lets you effortlessly see which of your suppliers are based in the contentious region.
‍
You can also use FRDM’s trading partners module to trace second and third-tier suppliers (or beyond) to determine connections to Xinjiang. For example, you may believe that your solar panels are coming from Malaysia, but the polysilicon used to create the panel might have originated in China, exposing you to unknown risks. Until you know more about your suppliers and subsuppliers, you won’t be able to address these concerns. 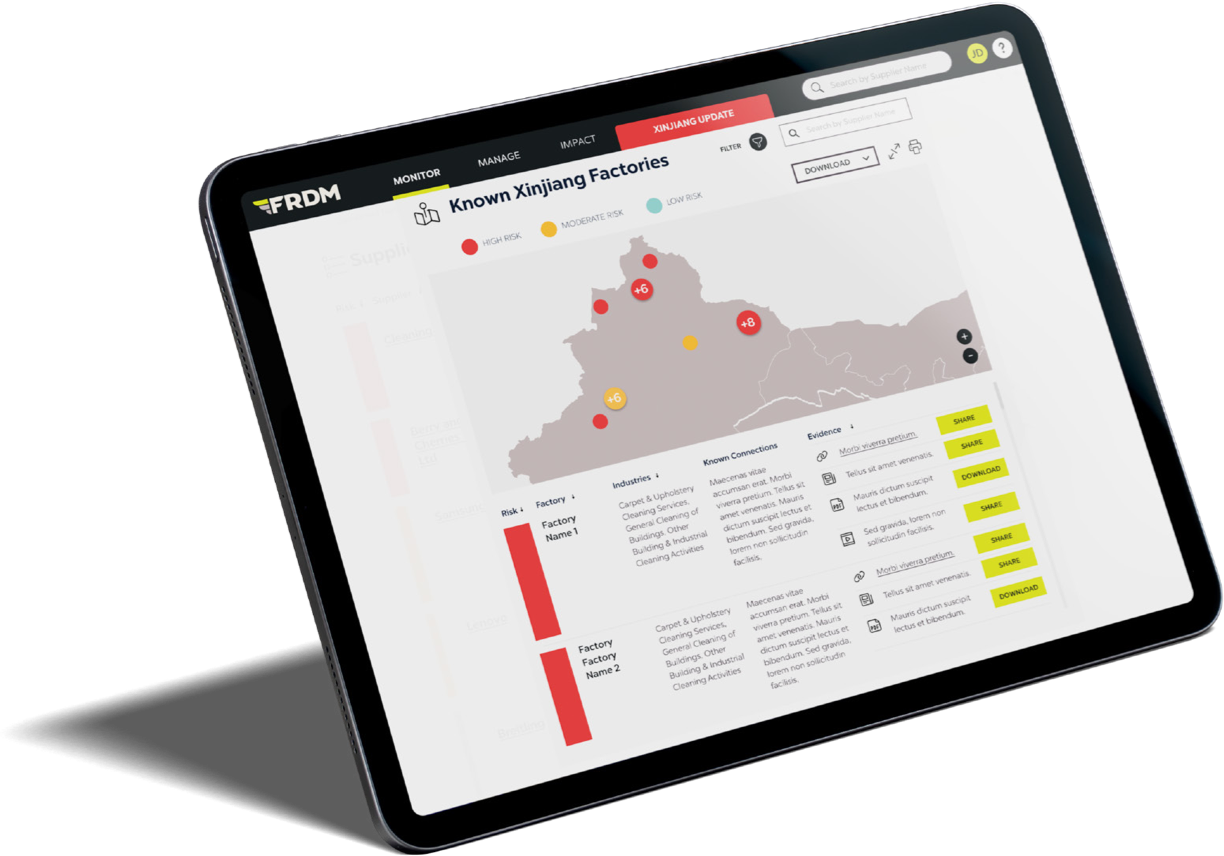 Once you know more about your suppliers and have a high degree of confidence in your data, you can choose to amplify that information by sending your suppliers a Self Assessment Questionnaire (SAQ) that gathers more information about how they do business. A subscription to FRDM gives you unlimited SAQs, so you can consistently send, assess, and report on your suppliers.
‍
When completed, SAQs are added to your supplier file along with any other certifications or documents that you’ve collected. You can also share your insights with the supplier to work together toward addressing any gaps in the data and mitigating risks. Having a shipment seized isn’t good for you or your supplier, and by working together you can prove that you’re both doing your due diligence to combat forced labor wherever it happens.
‍
While we don’t know exactly what evidence will be required to show that imported goods didn’t come from forced labor in Xinjiang, building this kind of paper trail is always helpful when documenting due diligence on both sides of the buyer-supplier relationship. 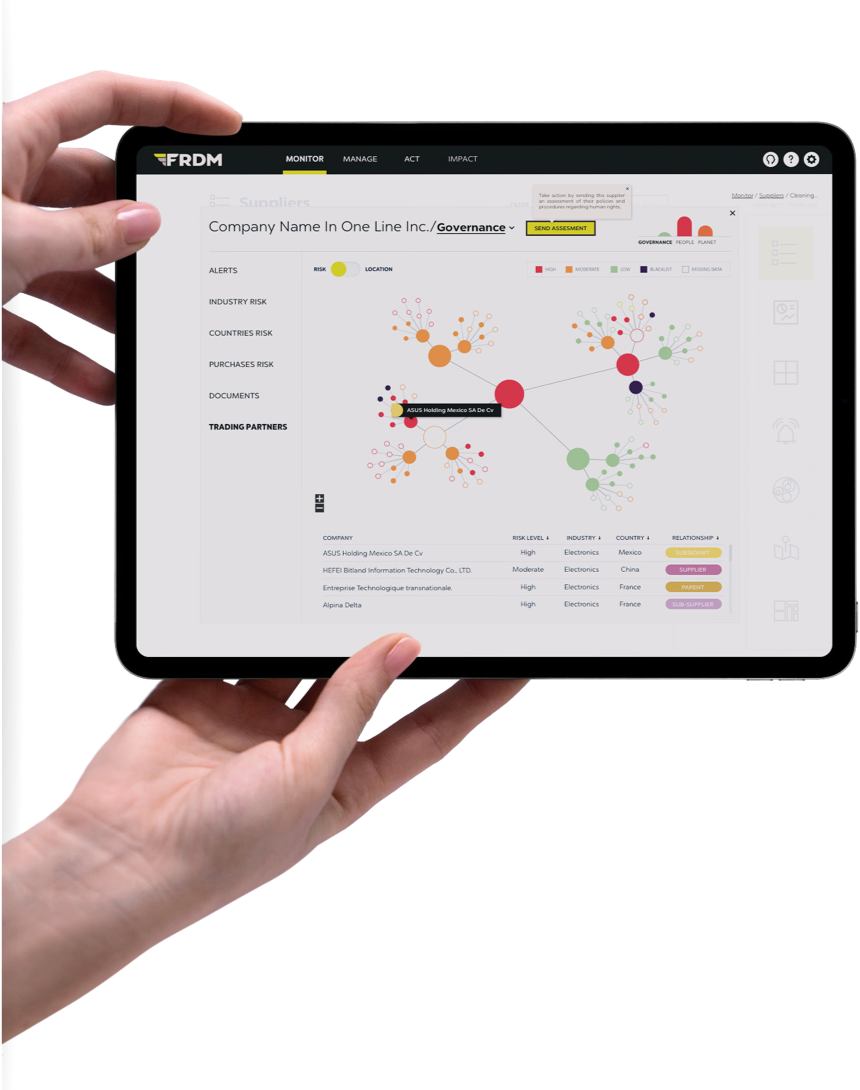 Supply chains aren’t static, and neither is risk. Whether it’s new information that’s continually uncovered by researchers, the latest WROs, or top-tier media revealing a scandal, risk signals are ongoing. Monitoring those risks is a priority for any organization, but with hundreds, thousands, or even hundreds of thousands of suppliers, you might not be able to stay on top of the latest information.
‍
That’s why FRDM provides real-time alerts. Our crawler leverages machine learning to accurately cut through the noise and provide only the most reliable information about your suppliers so that you can be the first to know when situations change in a region, industry, or with a specific company. Then you can use custom workflows to address these alerts, ensuring that the right people are looped in as you collect any new documentation or close the alert.
‍
The Uyghur Forced Labor Prevention Act is going to have an impact on businesses. No one will know exactly which evidence to prepare to keep shipments moving through border protection until the strategy is presented to Congress. By being proactive and mapping your supply chain, you can work closely with your suppliers to build a more transparent and resilient supply chain. This will ensure that your business thrives, regardless of the severity of enforcement of this legislation, or the passage of any future regulations.

We’re happy to walk you through FRDM’s software
and how it can help your business comply with all regulatory requirements for continued success.
CONTACT US
WATCH OUR VIDEO TO UNDERSTAND
HOW FRDM WORKS

SEND THIS INFORMATION TO YOUR INBOX

Product
SolutionsWhy FRDMFRDM for procurementFRDM for complianceFRDM for executives
RESOURCES
How It WorksBlogOshkosh Case Study
COMPANY
CareersAbout usPressContact usPRIVACY POLICYTERMS & CONDITIONS
Subscribe to our Newsletter
Thank you! Your submission has been received!
Oops! Something went wrong while submitting the form.
close